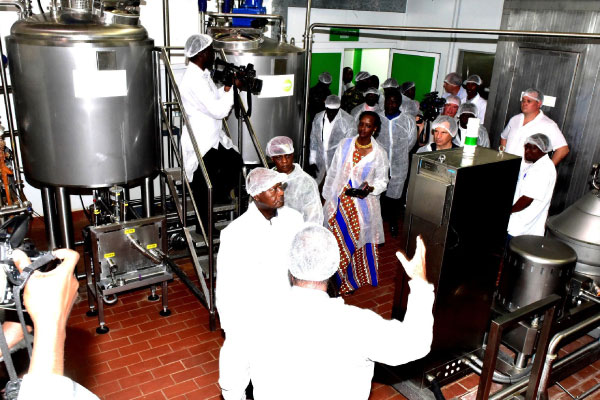 Kampala- It has been such a rough ride in the dairy sector and the damage is there for all to see.
Yes, it might be too early to tell the extent of the losses but with all certainty, the Uganda-Kenya milk trade war, will have some lasting impact on Uganda’s dairy sector.

Kenya has silently stopped milk exports from Uganda from entering its market on claims that Uganda cannot produce enough milk for the local and export markets.

The move had been in the works for some time. Perhaps, as early as 2018, Kenya had been planning on how it can implement the ban, albeit very cautiously.

Kenya is one of Uganda’s largest trading partners but authorities seem to have lost it after bottling up pressure from farmers, who continue to demand that they are protected from cheap milk exports amid rising stocks.

First the Kenyan government, through the country’s Trade Ministry had sought a tactical ban by introducing a 16 per cent levy on all milk exports.

The levy had come after a delegation of government officials had visited Uganda mid last year to establish the facts behind Uganda’s capacity to export large quantities of milk to Kenya yet local consumption remains meagre.

So brazen was the move that it particularly targeted Uganda milk exports.

However, before it could materialise, President Uhuru Kenyatta quashed it, saying the levy could only apply to milk imports outside the East African Community.

Kenya has largely remained silent on the matter with claims from unofficial circles only questioning how Uganda would be able to export large quantities of cheap milk, albeit with low local consumption.

A protest note issued by government last month and delivered to the Kenya High Commission in Kampala by Trade Minister Amelia Kyambadde and State Minister for Foreign Affairs Okello Oryem has not been responded to, days after a 15-day ultimatum and an intergovernmental agencies plot to retaliate by blocking certain Kenyan goods from entering Uganda has since gone cold.

An intergovernmental agencies memo that Daily Monitor had seen last month had proposed to retaliate on a number of Kenyan goods, key among them assorted household items and roofing material.

However, while presiding over the NRM celebrations in Nakaseke District last month President Museveni said: “There will be no retaliation,” as a measure to force Kenya to act up and open the market.

The President neither provided a way forward and no stand has been communicated since.

Ms Kyambadde yesterday seemed to have no update on what action government had decided to take in the face of continued hostility.
“Wait, we shall communicate to you when we decide,” she said in a brief phone interview after Daily Monitor had requested for updates specifically on the protest note, which had expired without any response.

Amid all the uncertainty, the cost and impact seem to be well spread and will hurt even much further if no solution is provided in the short term.

Kenya has already locked out two milk exporting companies from its market with the latest being Lakeside Dairies, which produces Dairy Top milk, in western Uganda.

The company had been exporting about 80,000 liters of UHT milk to Kenya every day with yoghurt produced for the local market.
Last week, according to information obtained from URA, the company was forced to return 10, 40 feet truck-loads of milk after Kenya authorities acted hostile on its products some of which had been seized while others were outrightly denied clearance.

Lakeside Dairies is also counting losses and has subsequently, closed its UHT milk production line.
The company, also in the western part of Uganda, produces Dairy Top milk and yoghurt.

However, it has since shut down its UHT production line and is currently only producing yoghurt.

“We had been operating at 150,000 litres but we immediately cut down. We are now only operating the yoghurt line,” a source at Lakeside Dairies, who asked to remain anonymous due to the sensitivity of the matter, told Daily Monitor yesterday.
Recently, Pearl Dairies indicated it had lost close to Shs1.1b in milk exports in the wake of the hostilities.

Milk farm-gate prices, details indicate, have been falling and now stand at an average of Shs500 from Shs700 per litre with a few companies trying to mop up whatever they can afford.

“Some prices [farm-gate] have fallen, for instance in Bukanga, to as low as Shs400 per litre. The main companies that are now active in the market are Amos Dairies, GBK and partly Pearl,” says Steven Aikiruza, a dairy expert with SNV attached to western Uganda.

Milk production in Uganda has been growing and as of December 2018, Uganda had been producing an average of 2.5b per annum. However, consumption continues to be below standing at 62 litres per capita, according to Uganda Dairy Development Authority compared to Kenya’s annual per capita milk consumption of 19 kg in rural areas and 125 kg in urban ones, according to Food and Agricultural Organisation.

In Africa, DDA indicates, Ethiopia, Kenya, South Africa, and Sudan produce the most milk. However, only Ethiopia and Kenya are self-sufficient, which means that dairy production meets or exceeds dairy consumption.