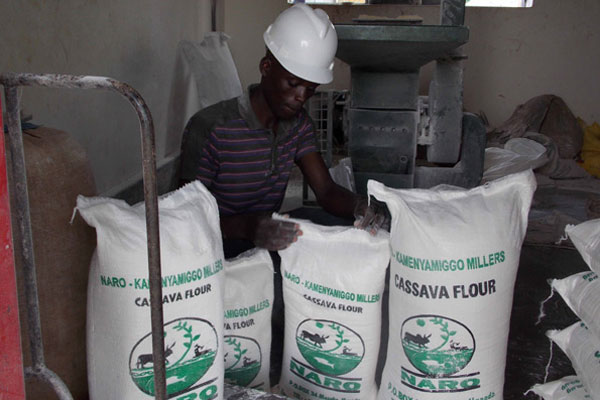 Did you know that your cassava flour is a highly demanded commodity by manufacturers internationally and locally?
Yes. Cassava flour is a high demand commodity in China.
Ideally, cassava is the starchy tuberous root of a tropical tree used as food in tropical countries.
This whole root is peeled, dried and ground into flour. This flour is what is highly demanded in China.
So why not turn that extra cassava tuber into flour, package it well for export and start earning in foreign currency.
Mr John Lwere, UEPB’s exports promotions executive, says: “The beauty is that cassava can be grown anywhere in Uganda because 80 per cent is arable land.”

Uses
Cassava flour is used as a raw material in manufacturing of processed food, animal feed and industrial products.
Wider utilisation of cassava products can be a catalyst for rural industrial development and raise the incomes for producers, processors and traders.
Cassava flour also is often used as a substitute for wheat flour, especially to make breads, cakes, pasta and dumplings. It is also used to make starchy custards and puddings.
In countries where wheat has to be imported and is in limited supply, bread is made by mixing cassava flour with wheat flour.

Exporters’ experiences
Mr Bosco Lawino, the chief executive officer Tropical Trade International Co Ltd, is one of the Ugandans venturing exporting cassava flour to China.
Mr Lawino is in final stages of concluding a deal to at least supply 200 metric tonnes of cassava flour monthly to China.
Sharing his story with Prosper Magazine, at the China Export in Beijing China, Lawino says: “Cassava flour is highly demanded by industrialists in China who use it to produce starch.”
He said judging from his trade partners, the demand for cassava flour is huge but he can only be able to supply 200 tonnes per month.
“My advice to Ugandans is to get organised and supply more tonnes because the market is available,” Mr Lawino says.

Guideline to exporting
When exporting, identify and win the trust of buyers by registering you company with the Uganda Registration Services Bureau (URSB). Also get a Tax Identification Number (TIN).
Before exporting cassava, register with business support institutions such as Uganda Export Promotions Board (UEPB).
Mr Lwere says: “This will help you gain access to available support services including capacity building, market information and business linkages.”
Registration with UEPB is free. However, other entities may charge fees depending on the services they will be offering.
If the raw material is of plant origin, Mr Lwere says an internationally recognised fumigation certificate will be required as evidence of fumigation.
Contact the Ministry of Agriculture, Animal Industry & Fisheries for a list of the certified fumigators.
The fumigator will charge in accordance to the work to be done but the fees are negotiable.
Then the exporter is required to generate an invoice/packing list with details of the products being exported.
If you are targeting the European Union (EU), then registration into the EU Registered Export System (REX) is compulsory. This is a new system used by the EU replacing the GSP (Generalised System of Preferences) and EU certificates of origin that have been used in the past to declare origin of products.
Lwere shares that if the potential exporter is targeting other preferential markets, other than the EU, then the exporter is required to register onto the Single Window System, to access all preferential certificates of origin.

Market
China remains the world’s largest importer of cassava with an import bill of $1.37 billion (Shs5 trillion).
This is followed by the United Kingdom rated at $114m (Shs424b), the United States $110m (Shs409b), and the Netherlands $89.9m (Shs334b).
Locally, some companies such as Uganda Breweries Limited (UBL) use cassava to produce some beer brands such as Engule.
The ethanol processing plant in Lira (Kampec) also uses dry cassava. South Sudan refugees crave for cassava so is Rwanda and DR Congo.